Block C1 –  Another red and green and I’m quite liking these two colours together.

Block C5 – I noted what you said regarding this block and have decided to make mine in sync with the other corner.  I have also just noted that i have left out the dot in the middle of the hearts.  On my “to do” list.

Block A2 – I used a new red with a blue check made of little dots of light blue and green.

Have completed some more blocks, and will do posts next week.

Block G3- I enjoyed doing the blue skinny stems on this block and needle- turned the cherries and I think they manage to look like cherries.

Block E6 – I notice my colour red is a lot darker than what you have used, but I like the two colours together.  As you say, E6 and A6 were both pretty easy to do.

Block A6 – Didn’t have a variegated blue so used a blue from my stash.  Most of my reproduction fabrics don’t have any name or number on them, so I have to go with what is there.  I have since bought a couple of grab bags from America and it was like Christmas when I opened them to see what they had sent.  Fantastic and so much fabric! 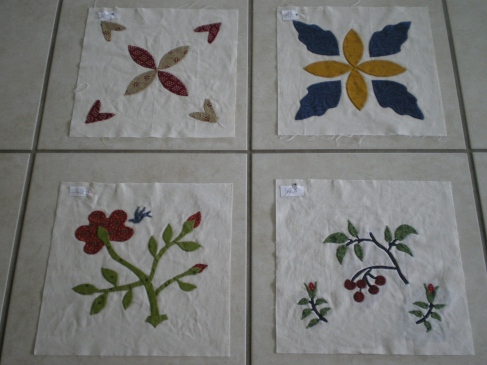 Block E7 – I have just noticed that the poor old bird doesn’t have a beak as yet – will make a list of all the embroidery that needs to be done to complete the blocks.  The red and green goes well together

Hi Margaret,  hopefully we are off and running.  As you will note I don’t have the blocks in the order of yours, but I’ve taken photos of what has been completed and are now up on my design wall.  Block G4 is still waiting to be finished – I’m waiting for the fairies to come and make up all the circles!  Will get a rush of blood soon and will finish it off.  I’ve been trying to use fabrics close to what you have used, but after seeing the photos on this blog, I will have to refer to it from now on.  The colours are much brighter and I can easily see what you have used, whereas before, it was a case of “pretty close to”. 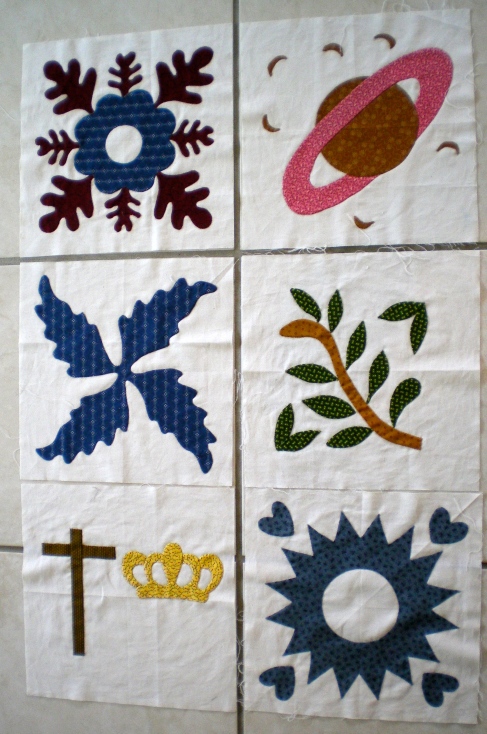 Block C8 – I’ve used a dark maroon to go with the blue and think it looks rather good.

Block A4 – well I had to have a second go at getting this right.  It was upside down to start with and I had missed a couple of the moon shapes.  My centre piece is a dark mustard colour.

Block F4 – Had trouble trying to find a Prussian Blue, so used this one instead.

Block F8 – I was hoping to have some of the dark orange colour for my next block (D3), but must have only had a small piece in the beginning.

Block C4 – I have noticed on a few of the blog pictures, others have done the crown with laurel leaves each side, but I decided to leave as is.  I like the gold of the crown and enjoyed doing the reverse applique.

H8 – The points took some concentration and there’s probably only a few that are really pointed, although it looks ok in the photo.

I notice on my design wall that there’s quite a lot of blue, so will keep an eye on that corner for the other blocks that are in that area.

And here it is – my Malataville top 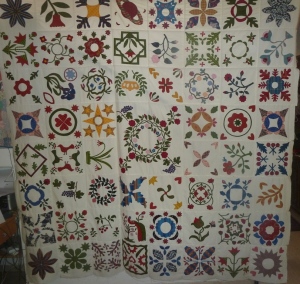 So – what do I have now? One finished Maltaville top, a (relatively) clean dining room table (which is where I work and audition fabrics), and a  bitter-sweet sence of  the end of a great experience. It’s been a wonderful journey that has taught me a lot. For one thing, this quilt was the reason I started using back-basting, a method that completely changed my view of applique. It has also taught me about patience, and about camaraderie with quilters from all over the world, as well as quilters from long ago. And for all of that I owe Margaret a huge debt of gratitude. Dear Margaret, you’ve done such a marvelous job, both in producing the pattern for this beauty and making it available to quilters so far away – so thank you for allowing us to join you on your journey.

May Blocks – the Last Ones…

Well, here they are. I was  bit melnacholy working on them – this has been such a wonderful journey, it’s sad to see it coming to a close. On the other hand – well, I did want to see the whole top, and I have a guild meeting on the first Tuesday of the month, so made an effort to finish (yes, I want to brag :-)). This month’s definite favorite was G7, although B2 was a close runner up. I loved using the quirky sort-of-checked black-green-yellow print, which does not look like it would lend itself well to floral applique, but does – with a vengeance. And for A1, the floral shape with the blue ombre stripe, I had to dig through my entire stash – I knew I had this print somewhere but had NO idea where. As you can see, it may have taken a day of rummaging, but I got it.

PS – sorry about the quality of the photos – my camera has gone a bit lame and needs a visit to the local fix-it guy.

I’ve been busy today doing the ‘neat’ draft of the final four blocks.  Of course I should have done them before I left for the US but, well you know how it is!

Before I show you the blocks coming out tomorrow though I’d love to share just a little of my (and my Maltaville quilt’s) trip.

A highlight was visiting the Smithsonian Institute’s Museum of American History.  I was able to spend a morning with curator Doris M. Bowman.  Together we took the original Maltaville Album Quilt out of its drawer and lay it out carefully on the table so I could spend some time studying it.  To say I felt privileged is a major understatement.

I was able to see how my efforts compared to the quilt made by the good ladies of Maltaville, New York all those years ago.

Mine looks so white!!

I’m grinning like the cat that got the cream.

The quilt is edged with a fine piping covered in a red fabric. The cream fabric you see is not a border but a very wide binding (unfilled) approx 1 1/4″ finished.

And there were a few other secrets the original threw up which I will share as time goes on.

I am in two minds now about how to quilt mine, and perhaps I will hand quilt it.

Anyway, four blocks are ready to go tomorrow and here they are 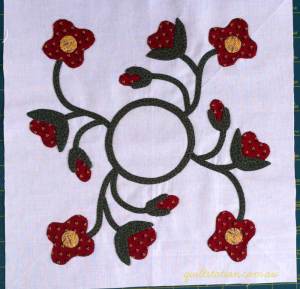 Posted in Block A1, Block B2, Block B3, Block G7, Maltaville Matters | 1 Comment

April’s blocks went quite fast – maybe due to the fact that I started putting the blocks together. They seem quite different when joined, and I’m pretty amazed – I like them even better this way. For B4 and B1 I … Continue reading →

I’ll be sending April’s blocks out later today and I am hoping there won’t be any errant blocks floating around the stratosphere instead of in your inboxes where they belong.

Webmeister Jenn and I talked about it the other day and she suggested it may be a setting with the recipients’ internet providers halting mail with too many attachments.

I think there is probably nothing that I or any of you can do about that so we will just carry on and keep our fingers crossed.

But the blocks are being sent out today, so if you haven’t received them by tonight then please let me know asap.  I will be in the USA for three weeks and won’t have my computer with me so I won’t be able to resend any after Wednesday.

But enough of all that boring techno stuff 😉

Can you spot a block fabric change I have made?

I’m taking it to the US with me as I’ll be meeting up with a few of you and I thought you might like to see it.

This month for mailout # 15 you will see

This Margo Krager Dargate Prussian Blue c 1830 (above) has been such a favourite fabric for this quilt.  It’s been perfect for so many blocks, four plus the centre block tho you’d be hard pressed to recognise it there, it’s in such small pieces.

Another Margo Krager Dargate Prussian Blue c1830 appears below and again this one has been one I keep coming back to.  It appears in four blocks. 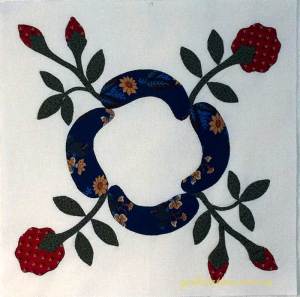 The name on the original block is Mary C or L Waterbury or Waterburg.

And lastly this month there will be

First was the little cherry wreath – pure delight. (Sue garman’s Lilly Rosenberry quilt is next on my to do list, once Maltaville is finished, so this is good practice). Then the wreath – instead of bluish green and brown, I chose a really dark green to go with the pink, and think it’s OK. For the large floral shape I really went to town – a rather large blue obmre print by Mimi Dietrich, with an amazing Turkey red that needs a large shape to really shine. I love the combined effect of both. Last came the blue wreath shape – here I used one of the really old Smithsonian fabrics (either Rising Sun or Groom’s Quilt, I’m too lazy to leave the computer and check the selvedge) with the buds done in fussy-cut flowers from one of the Dutch Chintzes. Although at first I wasn’t sure about all that blue, I like the result. 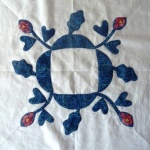